{day twenty three} the day i experienced the holocaust...

born in may 1938, elzbieta lusthaus grew up in iwonicz, a resort town in southwestern poland.  her father, edmund was a respected physician and helena, her mother, had studied pharmacology.  they were among the few jewish families who lived in their town.

when the german troops invaded poland in september 1939, elzbieta's father was drafted into the polish army.  seventeen days later he was captured and transported to a concentration camp.

after that, helena took elzbieta to live with her grandmother.  in june of 1942, elzbieta's grandmother was transported to belzec killing center.  helena bought aryan papers, thin sheets of lies to elude arrest.  mother and daughter escaped to milanowek, a town near warsaw, where they lived with a polish family.  helena changed elzbieta's name to barbara and raised her catholic.  when the nazis intensified their efforts to find jews in hiding, helena kept her daughter from school, hiding her in the basement.

in may 1945, helena bribed a russian soldier to smuggle her and elzbieta in shipping crates across the border to czechoslovakia.  from there, mother and daughter traveled to austria and then germany, where they learned edmund had survived and was in italy with the polish army.

in 1951, the family was reunited and they came to live in the united states.

yesterday, my girl and i took on the identity of helena and elzbieta.

we visited the holocaust museum.
as i chose our identification papers, i had no idea until i opened the passport that the girl i chose would the about the same age as my daughter.

all day i thought of the horror a mother's heart must have endured to protect her baby.
a baby who never should have to experience such cruelty or brutality.

and yet, i remembered.
that the king of the jews suffered and died for all of us.
for He endured the most horrific conditions.
everything heaped on Him so we could live free.

as i absorbed all the heartache, i rejoiced.
for elzbieta was reunited with her family and came to live in the land of the free.
my heart fluttered with the Truth of it all.

we are all one in Christ Jesus.
me and my daughter.
as well, as helena and elzbieta.

i suppose i will never forget the experience of enduring the holocaust through the eyes of these two.
i will carry them with me. 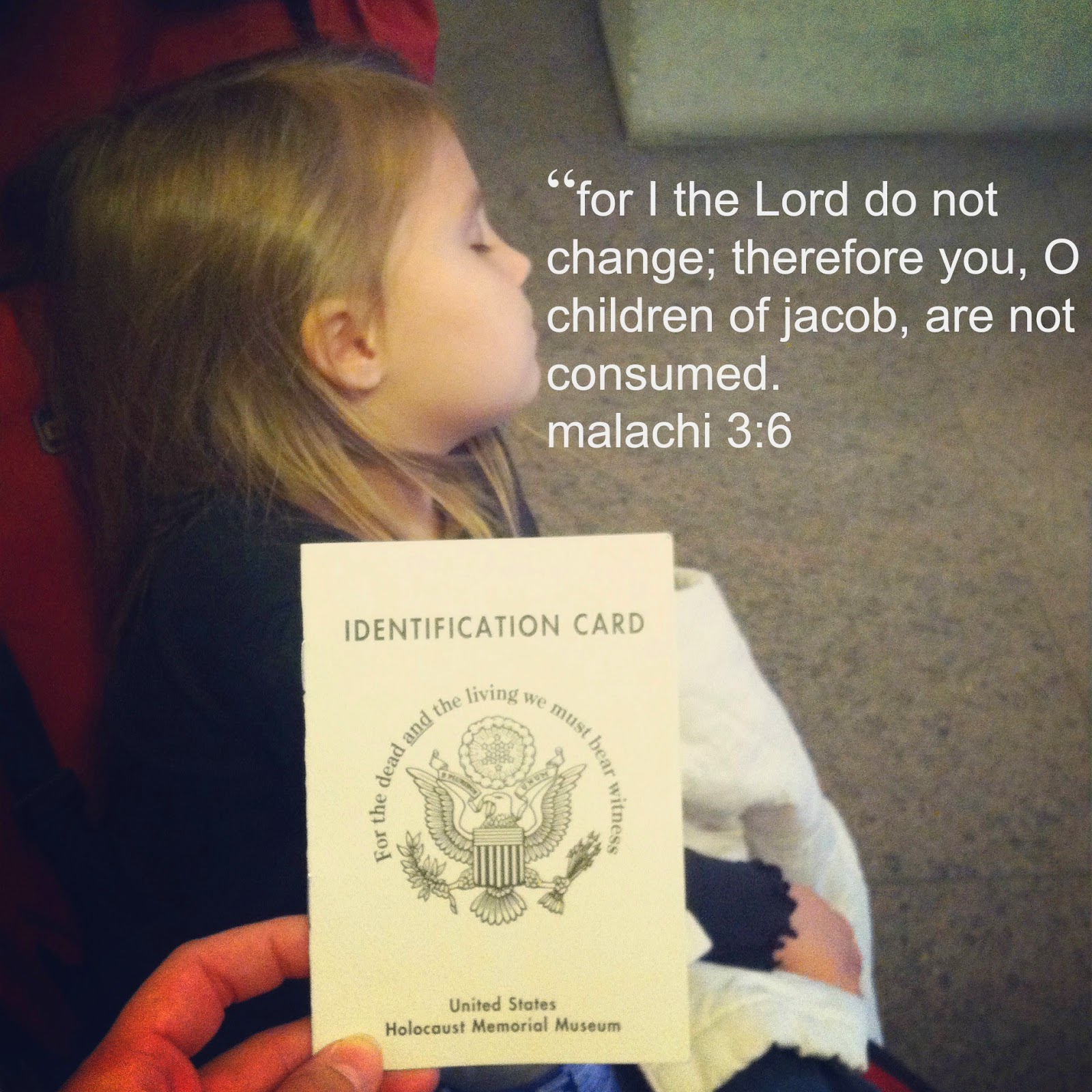 we are not consumed.
we are free in Christ Jesus.
amen.